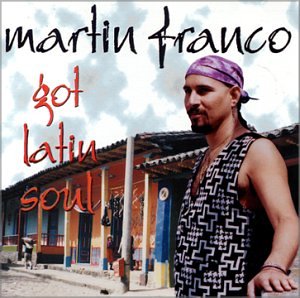 Blending Latino Roots with Hip Hop and Ramp;B, Got Latin Soul is a jazzy album that will rock your soul.

Martin Franco rocks the mic, in addition to playing keyboards and sax. Don't be fooled by the lack of exposure. -- SF Bay Guardian- Davey D.

Martin Franco's prime passion in life is music. An acclaimed vocalist and rapper, saxophonist and multi-instrumentalist, Martin is also a prolific songwriter, producer and recording engineer. He has now released his first full length CD, Got Latin Soul.

A multi-cultural mix of Colombian and Italian roots, Martin was raised travelling, spending his early childhood years in Mexico City. His family moved to the USA when he was seven, where he quickly picked up the sax and began his lifelong love affair with music. From an early age, Martin was turned on to jazz and classical as well as cumbia and mambo by his parents who were avid fans. Early favorites included John Coltrane, Miles Davis, Tito Puente, and Lucho Bermudez, sources of many hours of inspiration.

Later moving to Brooklyn (NY), Martin was turned on by the explosive mix of latino percussion with sophisticated jazz; the salsa of the seventies. Simultaneously, he was inspired by Santana's latin rock fusion and the mix of world beats so much a part of the scene in New York City.

After going to Berklee College of Music, he became a multi-instrumentalist; adding keyboards, guitar and full percussion to his repertoire.

Simultaneously, while traveling around the world, (cause he loves to travel!) and playing his saxophone in clubs from France to Thailand, Italy to India, Martin began exploring singing and rapping.

Coming back to the States in the early 90s, Martin formed the band Shango Mantra with Joel Lunzaga to explore a mix of latino beats with hip hop influences. The band received rave reviews in Latin Beat Magazine, the San Francisco Bay Guardian, and others, and played all over the S.F. Bay area. He has now released his CD as a solo artist, and will be touring with his band again while managing his production company, Xango Productions.

Find a Park Book and Pay

Park of the Month

Get the full picture competition update

The state government acknowledges Aboriginal people as the First Peoples and Nations of the lands and waters we live and work upon and we pay our respects to their Elders past, present and emerging. We acknowledge and respect the deep spiritual connection and the relationship that Aboriginal and Torres Strait Islander people have to Country.

We work in partnership with the First Peoples of South Australia and supports their Nations to take a leading role in caring for their Country.